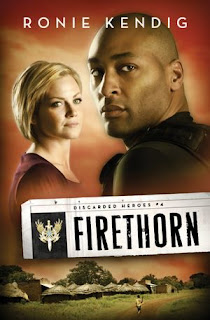 Ever been on Rockin’ Rollercoaster at Disney’s MGM park? If you have, you’ll know what to expect from Firethorn. If you haven’t, you’ll feel like it once you’ve finished this book.

Out of the chute at sixty mph, twists and turns in the dark, Firethorn begins with a bang and doesn’t let up. Nothing is off limits in this book. Not the men we’ve gotten to know, their families, or the people they meet along the way. Firethorn takes you across the globe and into multiple character’s minds, never releasing the adrenaline rush that starts at the beginning, wrapping it all with suspense, thrills and romance—yep, this book’s got heart. And it’s why I loved it. Why I love Ronie Kendig’s books.

Firethorn is the last in the Discarded Heroes series, and while I am immensely sad to see these guys go, all good things must come to an end. It’s always hard to let go of a series that pulls you in as deeply as this one did, but Ronie has done it well. A tear, a smile, a satisfied sigh as I closed the last page, this series will remain on my bookshelf for years to come.

If you haven’t read Discarded Heroes, you definitely don’t have to start at book one, but you’ll be cheating yourself out of one giant ride if you don’t. Nightshade is where it all began, Firethorn is where it ends, and don’t miss the action in the middle.

Here's the back blurb from Firethorn:

Don your tactical gear and enter the world of black ops and espionage within the pages of Ronie Kendig’s thriller Firethorn. Former Marine Griffin “Legend” Riddell, a fugitive from injustice, finds it difficult to trust anyone. Covert operative Kazi Faron, the woman sent to free him, has a dangerous secret that may jeopardize her life, mission, and the only man she respects. As Griffin and Kazi race around the globe to save Nightshade, the danger mounts. Will they find the culprit sabotaging their black ops team? Can their newfound feelings and trust survive when Griffin and Kazi face truth and terror?

Pick it up and enjoy!