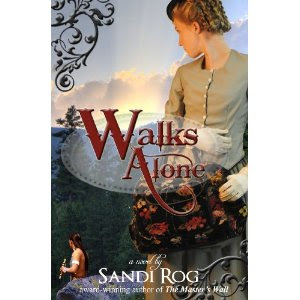 The past two weeks have flown by with little time to read. Yet, in the middle of all my busyness I kept stealing small snippets of time to pick up Walks Alone, even if it was simply to read another paragraph. This book was like a lazy river ride full of twists and turns that slowed my crazy mind, but entertained me all the while. Sandi Rog's descriptions of the western countryside, the Cheyenne villages, and even Denver City were beautiful. Not only did she make the scenery come alive, but she sucked you into the lives of her characters. I loved getting to know Anna and Jean-Marc/White Eagle as they took their journey toward forgiveness and love. If you haven't experienced this book, add it to your To Be Read pile!

A Cheyenne warrior bent on vengeance.

A pioneer woman bent on fulfilling a dream.

Until their paths collide.

After fleeing her abusive uncle, Anna is determined to reach the city of her dreams. But White Eagle and his fierce warriors take her prisoner. Anna attempts a harrowing escape, but her savage captor is determined to have her at all costs and forces her to be his wife. Has God forgotten her, or does He have plans of His own?

A man with a boot in one world and a moccasin in the other, White Eagle is disillusioned with his faith after a minister leads a massacre on his peaceful tribe. Where is his God? He’s definitely not with the white men who are slaughtering his people. But White Eagle also can’t give in to the idolatry practiced by his fellow tribesmen. Only the Truth can set him free.

Walks Alone is currently offered as an E-book on Amazon, soon to be released in hard copy.