Bookshelf Friday - Love on the Line 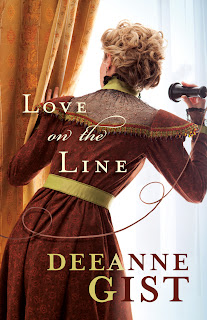 To all of you who've already read this--it was as good as you said it was.

To all of you still waiting to read it--pick it up!

Rural switchboard operator Georgie Gail is proud of her independence in a man's world ... which makes it twice as vexing when the telephone company sends a man to look over her shoulder.Dashing Luke Palmer is more than he appears though.  He's a Texas Ranger working undercover to infiltrate a notorious gang of train robbers.  Repairing telephones and tangling with this tempestuous woman is the last thing he wants to do.  But when his stakeout puts Georgie in peril, he realizes more than his job is on the line.


It took me until about chapter four to get into this book, but it's at chapter four that Luke and Georgie officially meet, and with that explosive moment I was hooked. They didn't exactly fall in love at first site:) But it was how they learned to love, respect, and care for one another despite their differences that pulled me in.

I also loved the amount of research Deeanne did, not only to her location but into her characters lives. I truly felt like I was living in Texas in the early 1900's, learning to watch birds, working a telephone switchboard, and attending the Maifest. The more I read, the more this book came alive.

So, if you're in need of a little summer vacation--time warp style--pick up Deeanne's Love on a Line, sit back, and enjoy:)

Have a GREAT weekend everyone!
Posted by Susan at 12:00 AM