What I Learned From Downtown Abbey--or my lack of knowledge thereof...

So Friday night Hubby came home very tired from helping our neighbors move. He slunk off to bed. My girls were already there, but my son had a friend over for the night. Not wanting to nod off to sleep before them, (for fear of what the house might look like the next morning or what groceries might be missing) I decided to see what everyone was up to on Facebook. And there my friend Dawn Crandall had just posted this picture: 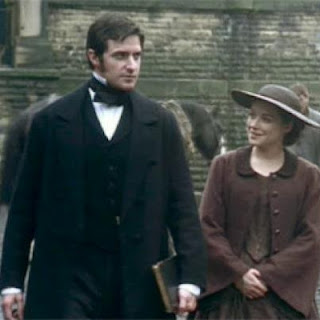 with this status: "I'm finally starting this!"

To which I replied: "I think I'll start too!"

I was beyond ecstatic to find another human being who'd never seen Downtown Abbey! (If you are a fan of the show, you can quit laughing now). So I found it on Netflix and started watching, checking out Dawn's status along the way, feeling very much a part of something big. When people there told her the dinner party was a great scene, I couldn't wait to get to that part. Finally, in the second episode there was a dinner party, kind of, but no smoldering looks between the two in the picture there as promised--who, by the way, I wasn't quite sure I'd even seen yet. I convinced myself that it had to be Mary with a man she'd eventually fall for...who was played by this Richard Armitage they kept talking about who'd also been in the movie North & South. 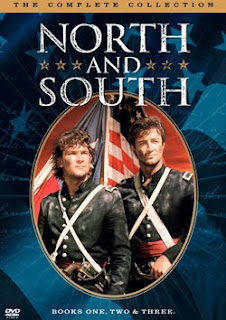 Now I just loved that movie--Patrick Swayze was a dreamboat--but I couldn't remember anything about a Richard Armitage. Imagine my glee when I pulled up the cover and saw him on it. But wait...how on earth had Richard not aged in the last thirty years?

I was sooooo confused.

It took me pausing the movie and reading two different bio's of Richard's to realize...

Dawn wasn't watching Downtown Abbey, she was watching North & South, but not the North & South I was thinking of...oh, I was so off base in so many ways and all because I knew nothing at all about Downtown Abbey. I've heard a lot of buzz about it. I know it's the "it" show right now. And when I saw that picture Dawn posted I just assumed Downtown Abbey was what she was talking about. (It does look similar, maybe...right?)

Anyway, I had a good chuckle with myself and then kept watching Downtown Abbey. But my mind wandered a bit--it was nearly one a.m. so a bit of wandering is allowed. I started thinking about how easily we can also get off track with God. For some it's the same thing as Downtown Abbey and me. They've heard a lot about God, but they don't know Him well enough to understand if they're watching Him or something else completely. And while they may convince themselves they're on the right track--like me trying to make all those actors into the same people--it does not make their belief into truth.

The only way to not be fooled (an even as Christians, we can be fooled) is to know God intimately. Know His voice. Know His Word. So when you catch a snapshot of something, you'll know if it's Him or not. And if you're even the least bit unsure, stop...pause what you're doing...and pray about it. Seek out God's truth. Don't go any farther until you KNOW what's in front of you.

Yeah, I know, a deep message from my silly mistake, but isn't that so often how God works? He takes these real-life missteps and uses them to speak to us. I love how relational He is that way. And that He laughs with us.  Go ahead, now you can laugh with me too :)

So I've got to know, anyone out there Downtown Abbey fans? I'm going to admit...I'm not--at least not yet. I'm half-way into episode four, wondering if I'm still missing something. I do like Bates, and of course, the countess because I love Maggie Smith, but I'm not in love with the show. Guess I'll have to try North & South--the British version!