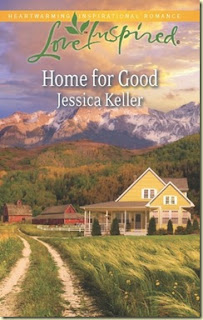 I had the pleasure of meeting Jessica last fall at our ACFW Conference. At that time she was waiting for the delivery of two special items: her debut novel Home for Good and her first baby! Both arrived just this month, and in the same week no less!

I have to say, I read Jessica's book in one long, lazy Saturday afternoon. Her main character, Ali Silver, captured me on the first page, and I was hooked from there. An easy ready, Home for Good is packed with a great message on forgiveness--and lots of romance:) I especially liked how Jessica shows that when we hold to our anger and bitterness, it only hurts us, but with forgiveness, freedom is found. Here's a short blurb:


"I made a promise to protect you."

But pregnant Ali Silver's husband broke his vow and walked away from her. After being injured in combat, Jericho has finally come home to Bitterroot Valley to make peace with his father and regain Ali's trust. But the single mom's keeping secrets of her own. And someone's killing off Ali's cattle and sabotaging her horse therapy business. Jericho will do whatever it takes to protect his wife and be a real father to his son. Because when it comes to love and second chances, he's one determined cowboy.

And Jericho holds true to his word--even while waiting patiently for Ali to forgive him. That's another aspect I liked: reconciliation. It's different than forgiveness, and it takes two people. Jessica does a great job of showing the path to reconciliation in Home for Good.

You can pick Home for Good up here--hope you have a great weekend! And if you want to learn more about Jessica, you can meet her at her website here.

As a child Jessica possessed the dangerous combination of too much energy coupled with an over-active imagination. This pairing led to more than seven broken bones and countless scars.

Oddly enough, she’s worked as a zookeeper, a librarian, camp counselor, horse wrangler, housekeeper, and finance clerk, but now loves her full-time work in law enforcement.
Former editor of both her college newspaper and literary journal at Trinity International University, Jessica received degrees in both Communications and Biblical Studies.
She lives in the Chicagoland suburbs with her amazing husband and two annoyingly outgoing cats that happen to be named after superheroes.
Posted by Susan at 6:30 AM