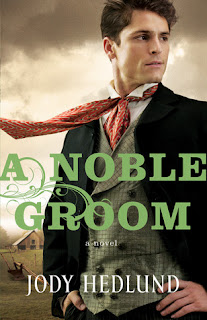 This is only my second time reading a Jody Hedlund book, and once again I can see why so many readers love her. Jody focuses strongly on her characters and their story, yet gives you a rich background full of history. She knows how to make the setting come alive without it taking over the page. Quite simply, you get lost in her books--and I love it when that happens.

Here's a little blurb for you:
Recently widowed Annalisa Werner has the feeling her husband was murdered but can't prove it. Alone with her young daughter in 1881 Michigan, she has six months left to finish raising the money needed to pay back the land contract her husband purchased, and the land is difficult to toil by herself. She needs a husband. With unmarried men scarce, her father sends a letter to his brother in the Old Country, asking him to find Annalisa a groom.

For nobleman Carl von Reichart, the blade of the guillotine is his fate. He's been accused and convicted of a serious crime he didn't commit, and his only escape is to flee to a small German community in Michigan where he'll be safe. He secures a job on Annalisa's farm but bumbles through learning about farming and manual labor.

Annalisa senses that Carl is harboring a secret about his past, yet she finds herself drawn to him anyway. He's gentle, kind, and romantic--unlike any of the men she's ever known. He begins to restore her faith in the ability to love--but her true groom is still on his way. And time is running out on them all.

Carl and Annalisa were a great pairing. Even from their first meeting, an easiness surrounds them...and laughter--which is new to Annalisa. We get to watch them both learn to love, and through that Annalisa begins to understand how much God loves her. Carl is a great leading man who finds a strength in himself he never knew he possessed, which made me like him even more. And he's great looking--I mean, check out that cover! :) Seriously, though, Jody wrote him in a way that it truly is all about his heart. Annalisa is one lucky girl who finally sees she deserves to know love and have her fairy tale. Marriage isn't about convenience or suffering through--and neither is her relationship with God.

I'm happily giving Noble Groom 5 out of 5 stars. So if you're looking for a great read, you can pick it up here. Have a wonderful weekend everybody!

If you'd like to see a break-down of what my stars equal, check out my page My Ratings System to the right there. And a big thanks to Bethany Publisher for a free copy of this book in exchange for my honest review.
Posted by Susan at 7:49 AM