I was reading Acts this past week and got to chapter 3 where I stopped and camped out on the story of the Lame Man. You know, the man who Peter and John saw at the gate to the temple? The cripple who was brought every day to the Beautiful Gate and left to beg.

Listen to these verses: 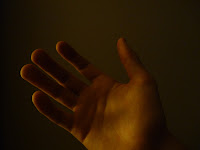 And when he saw Peter and John about to go into the temple, he began asking to receive alms. And Peter, along with John, fixed his gaze upon him and said, "Look at us!" And he began to give them his attention, expecting to receive something from them. But Peter said, "I do not possess silver and gold, but what I do have I give to you; In the name of Jesus Christ the Nazarene--walk!" And seizing him by the right hand, he raised him up; and immediately his feet and ankles were strengthened. And with a leap, he stood upright and began to walk...

I highlighted those words that stood out to me as I read. See, this beggar did all he knew. Here came these two men, two men known to have been with Christ, and the lame man held out his open hand and began asking them for alms. It's what he did every day. It was his life and all he knew. He could not work, but he could be provided for. When Peter and John stopped and asked for his full attention, the man turned to them, fully expecting to receive from them.

He asked. And he expected.

And God blew him away.  Immediately--which denotes a miracle--the man was healed. After a lifetime of being crippled, suddenly the man can walk.  My thoughts turned to Ephesians 3:20,

Now to Him who is able to do exeeding abundantly more than we can ask or imagine, according to his power that is at work within us...

See, it was an ordinary day for this lame man. He was doing all he'd ever done. I believe that healing had to have come as much as a surprise to him as to the people around him. It was beyond what he imagined in that moment, and far beyond what he was asking for.

And that's how God works. That is Ephesians 3:20 being lived out.

But it got me to thinking. What would have happened if that man had asked for healing. What if that's what he expected--not money--when he stopped those men of God? Would God have gone exceedingly abundantly beyond even that healing?

What about us? We all have dreams that God has planted in our hearts. Just as I'm sure that lame man had to dream about his healing. But sometimes those dreams seem so far out of reach we start to settle for simply asking what we know God will provide. Those things that have become a daily supply in our lives, or the things that seem easier to fulfill, and expect nothing too out of the ordinary to happen. We ask for just enough that seems safely able for Him to deliver. And with small expectations, it doesn't take much to go abundantly beyond them.

Anyone relate? I mean, I know I can fall into this habit real easily. It feels safer, to not expect too much. But really, where are our dreams and expectations safer than in the hands of our Father?

So what if we changed our expectations? I'm not saying He's our own personal genie, but what if we operated with the trust that ALL things truly are possible through our God--that nothing is too large for Him. What if those mind blowing moments were what we imagined? Ways He could use us to further His kingdom. Relationships He could heal. Old habits He could break. Not just great expectations, but HUGE expectations for a huge God.

I think maybe, just maybe, He would blow us away in ways we've never dreamed.
Posted by Susan at 6:30 AM