I don't want no stinkin' hat!

It all started the Christmas my older brother was 4...or maybe 5...I can't remember his exact age, but I remember the story because I heard it for years. My brother loved trucks. All shapes. All sizes. All colors. And it was all he wanted for Christmas.

Only Grans got him a hat.

A very nice hat. But a hat nonetheless.

She also got him a truck, but he happened to open the hat first. Which he promptly tossed across the room with "I don't want no stinkin' hat."

Now rest assured my brother learned never to do that again. However that story gave us lots of laughter for years. Until about six years ago when my oldest was seven. I'd shopped and shopped for Christmas. I handpicked each item for them, excitedly wrapped them, counted down the days with them. And then came Christmas morning. I always wonder who's more excited, the kids or me. (Pretty sure it's me.)

I could tell after the first gift was opened, this might not go too well. I started having visions of my brother and his hat--which suddenly didn't seem so funny after all. As my son progressed through his gift-opening turns, that memory grew less and less funny. No ooh's or aah's were heard from my son. No smiles. Just, well, boredom. Until he opened the last gift: a large bouncing ball for jumping around our basement. I'd picked each child out one personalized just for them. I knew the girls would like them, and I hoped he would too. Instead he tossed it aside. "I don't even want this."

...my husband will always remember that Christmas as the one where I tossed our breakfast onto the table and walked away in tears vowing to never purchase gifts again. And I certainly no longer saw humor in what my brother had done years before.

And yet, we do the same thing to God, don't we? 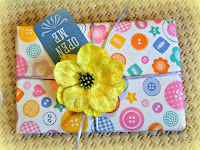 He hands us these amazing gifts in life and sometimes we are less than impressed. Other times we complain we didn't get what we wanted. And then sometimes we simply toss it aside because that gift, that one He picked especially for us, we don't want at all!

Thing is, a gift, a blessing, is chosen by the one giving it--not the receiver. We don't get to pick what it is or special order it. All we get to chose is how we receive it. Even if it's not what we wanted at that time. Because the giver knows it's what we need.

For my brother--he needed a hat, even if he didn't want one.
For my son--he'd be able to join in when his sisters were laughing and bouncing around the basement.
For us--we may need growth, or something is coming that we don't see, or maybe...just maybe...He chose to bless us in a way other than our preconceived notions thought He should.

And while manna and quail dropping out of Heaven is a pretty big thing to miss, sometimes the gifts are so small we overlook them. But gifts come in all shapes and sizes because God delights in our bigs and our smalls. He's a God of details, overlooking nothing.

And neither should we.

Train your eyes to see the gifts around you today, and then take a moment to say thank you, Lord. Because He lovingly picked each and every one out just for you.

For every good and perfect gift is from above, coming down from the Father of lights. James 1:17

What gifts do you see around you today?

My P.S to the story: My son is now a teenager and is thankful for everything he receives--big or small. My brother is now a parent, and I don't think I've ever seen his boys toss a gift aside. And I have since broken my vow to never purchase gifts again:)
Posted by Susan at 7:33 AM