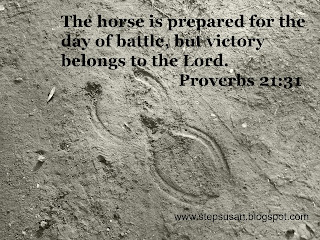 I'm piggy-backing on Monday's post here. The word VICTORY has stuck in my soul lately--I kinda think that's a great place for it to be! And as we learn our verses this second half of the year, we're doing so with the names of Jesus front and foremost, because there's victory in His name.

I chose this verse to remind of us Jehovah Nissi, or The Lord My Banner.

Jehovah Nissi is only seen one time in the Bible and it's in Exodus 17:15 when Moses builds an altar in remembrance of the Israelites defeating the Amalekites and he named the altar The Lord is my Banner.  If you've never read that story, please do, it's an amazing show of God's power and victory for His people.

But today I just want to talk about banners. Back in Biblical times, armies would raise up banners as they marched into war and even as they fought. It not only showed who they were, but gave their soldiers a focal point during battle.

Are you headed into battle? If so, remember, God is your banner. He unfurls over you, telling anyone who fights you Whose you are. He becomes your focal point, because we can accomplish much with our focus resting on Him and not the chaos around us--He keeps us grounded. And while preparation is great for battle, we must remember that victory belongs to Him. We cannot win any battles on our own. We must take our banner with us. Let Him fly over us. And let Him take the victory.

So as you step on the battlefield, let Jehovah Nissi fly over you, look the enemy straight in the eye and say "Victory belongs to the Lord...and I am His."

Have a great 4th of July friends. Enjoy a long weekend, and I'll see you back here on Monday!