Around last year I stumbled upon Jody Hedlund in the blogosphere someplace and was immediately snagged by the fact that she is a fellow Michigander. I picked up what was her third book, Unending Devotion, and was immediately hooked. While I read historicals, they aren't the first genre I usually gravitate toward. However, Jody is an author I'd read regardless of genre because she is an amazing writer. 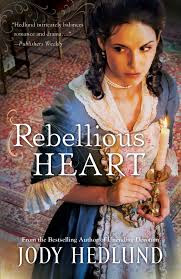 Her newest book, Rebellious Heart, is releasing on September 15th but I was lucky enough to get a preview of it. Here's the blurb:


In 1763 Massachusetts, Susanna Smith has grown up with everything she's ever wanted, except one thing: an education. Because she's a female, higher learning has been closed to her, but her quick mind and quicker tongue never back down from a challenge. She's determined to put her status to good use, reaching out to the poor and deprived. And she knows when she marries well, she will be able to continue her work with the less fortunate.

Ben Ross grew up a farmer's son and has nothing to his name but his Harvard education. A poor country lawyer, he doesn't see how he'll be able to fulfill his promise to make his father proud of him. When family friends introduce him to the Smith family, he's drawn to quick-witted Susanna but knows her family expects her to marry well. When Susanna's decision to help an innocent woman no matter the cost crosses with Ben's growing disillusionment with their British rulers, the two find themselves bound together in what quickly becomes a very dangerous fight for justice.

Jody has said this book was loosely based on John and Abigail Adams, and if so, then they are a couple I'd loved to have met. Their pairing, the beautiful friendship they forged, and their devoted love for one another drew me into this story. Susanna's strong character and loving heart for those less fortunate made me root for her. And Ben, well Ben...he won me over almost immediately and is a wonderful leading man. Swoon-worthy, really:) Jody did an amazing job with the chemistry between these two, and as is normal for her books, I didn't want it to end. But it did. And so I wait for the next one.

Until then, pick this one up here and enjoy. OR, leave me a comment below with your email address, and I'll enter you into the drawing for an autographed copy. Yes! That's right! Jody is giving one lucky reader an autographed copy of Rebellious Heart. Woo-hoo! So leave me your info in a comment below before Tuesday 9/10 at midnight.  I'll announce the winner on next Friday's Bookshelf.

And if you want to learn more about Jody, connect with her at her website or her Facebook page.

Have a great weekend everyone:)!

Check out the other blogs in this week's blog hop!