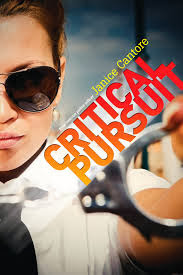 With Critical Pursuit, Janice Cantore begins a new series. This one is based on Brinna Caruso and her K-9 search and rescue dog, Hero. Here's a short blurb:


Officer Brinna Caruso has built a reputation at the precinct as the cop to call when a child goes missing. For Brinna, it’s personal because she was once one of them. Brinna and her K-9 search and rescue dog, Hero, will stop at nothing to find a missing child, no matter the stakes.

Detective Jack O’Reilly isn’t ready to return to his homicide duties, after losing his wife to a drunk driver. He’s on the downside of his career, and bent on revenge, when he’s assigned as Brinna’s partner. While on patrol, Jack struggles between his quest for personal justice and his responsibility to those around him, especially his partner.

Skeptical of Jack’s motives, Brinna isn’t sure she can rely on her new partner, whose reckless abandon endangers the safety of those around him. But when a man surfaces with an MO similar to the criminal who abducted Brinna twenty years earlier, Brinna and Jack must cast aside previous judgments and combine efforts to catch the kidnapper, and finally allow Brinna the peace stolen from her as a child.

I enjoyed the suspense of this book as Brinna chases after not only full healing, but also a monster from her past. Brinna's character is well fleshed out, her emotions and questions about God true to the struggles her character has been through. And they're not handled easily. I found the same with Jack as he mourns the death of his wife. Having been a Christian until she was killed in an accident, he now grapples with God's will for his life and if he can still believe in a God who would take his wife from him.

The spiritual ties in this book are tied up beautifully by the end. That arc was well written and tackled some very tough questions with very solid answers. Also, the suspense story for this book came to a full conclusion. But one area was opened and I believe we'll be waiting through the entire series for an answer, and that was Jack and Brinna. A romance between them was very lightly--and I mean very lightly--hinted at and may begin to develop more in book two. This wasn't billed as a romantic suspense, and at the point in their lives that this book opens to, it would have been untrue to the characters if they'd fallen in love within this book. However, the romantic in me wanted to see that!

My only true issue with this book was at times I felt the author narrated the story. I didn't get the feeling of being in the main character's skin, rather that I was being told a story about her. A very well-told story, mind you, but I prefer a closer style of writing when it comes to the characters I read.

Overall, I thought the story was well-written, I truly liked Jack and Brinna, and I'll pick up the next one in the series to see where they're headed. I give Critical Pursuit 4 out of 5 stars.


If you'd like to see a break-down of what my stars equal, check out my page My Ratings System to the right there. And a big thanks to NetGalley and the publisher for a free ecopy of this book in exchange for my honest review.
Posted by Susan at 7:27 AM