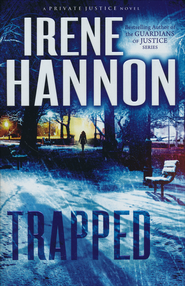 I picked up Trapped with the idea that I had a week to read it. I finished it in twenty-four hours. Should have known that'd be the case with another Irene Hannon book. Here's a little blurb:


When librarian Laura Griffith's sixteen-year-old sister disappears on a frigid February day, leaving only a brief note behind, Laura resolves to do whatever it takes to track down the runaway teen. That includes recruiting ATF agent turned PI James "Dev" Devlin to help. But the deeper he digs, the more he begins to suspect that something sinister is at work in the girl's disappearance. And the closer he gets to uncovering the truth, the clearer it becomes that the situation isn't just dangerous--it's deadly.

Trapped is the second in Irene Hannon's Private Justice series. These books do not need to be read in order. In fact, I have yet to read the first of the series but will definitely be returning for it. She's an author I always look forward to reading.

As for Trapped, Irene did a fantastic job with the bad guy in this book. I loved digging into his psyche and watching him unfold. We learn a little about him with each interaction which kept me turning pages. I also really liked both Laura and James. They were true to character and their budding romance gave me plenty of smiles. Another thing I typically enjoy with romantic suspense is the ability to see the story through multiple sets of eyes (or different POVs as some say) though in this book there was one in particular I felt could have been left out. That was of a minor character named Faith who was introduced later in the story. The only other time I had an issue with this book was at the end. There was a moment of what felt like author convenience as James rushes to Laura's rescue. I won't spoil it for you, but it gave me a pause of disbelief and pulled me momentarily from the story.

However, both were small issues in the middle of a great story and hardly enough to keep me from returning to Irene's books. She's great at romantic suspense and definitely delivers with this one. I happily give Trapped 4 out of 5 stars and cannot wait for the third book in this series.


If you'd like to see a break-down of what my stars equal, check out my page My Ratings System to the right there. And a big thanks to NetGalley and the publisher for a free ecopy of this book in exchange for my honest review.
Posted by Susan at 7:00 AM