In the White Space

So we're finishing our time in Haggai today. If you've missed the past two weeks, you can check them out by clicking on:

Give Careful Thought
No Comparison

Also, before we start today, I want to challenge you. If you've never spent time in just one book of the Bible, I encourage you to do so. Pray about it. Pick one book and settle in, just you, God, and your pretty pens and highlighters. Maybe a notebook too. There's just something about savoring his word in a new way that you don't want to miss.

All right, now on to today. We're talking about white spaces. Come take a look. 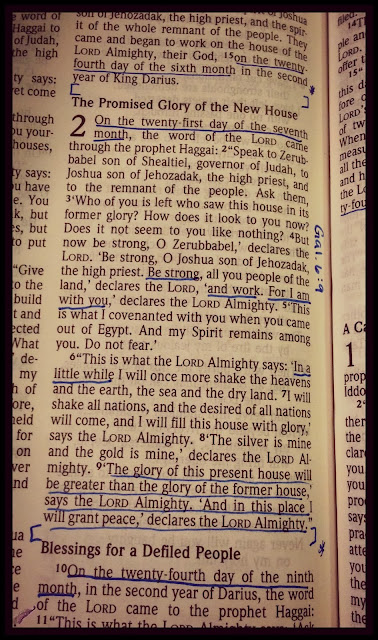 If you check out the top of that passage I posted, (I made it super big so you could) you see Israel stepped into their obedience on the twenty-fourth day of the sixth month. This happened just prior to chapter two. Then there's a bit of white space before chapter two, but for Israel that white space equaled a month of hard work. Read it. The story picks back up on the twenty-first day of the seventh month. Like we touched on last week, God sends Haggai to encourage them with "be strong and work". But if you're looking, their situation hasn't changed. No fruitful harvests, no warm clothes, their bills still aren't paid. In short, they've been obedient in what God called but have yet to see one of their circumstances change.

And yet God wants them to "be strong and work."

Then there's more white space. This time it's two months of hard work. Back breaking work. Obedient work. With no change in their surroundings.

And that's where I finally gave pause. That's where those words "be strong and work" reverberated in my mind. Right there in that white space. Because I've been there. I am there. And I know I'm not the only one.

God calls us into obedience. Sometimes, like Israel, it's to do a job. Other times it's to hit our knees in prayer. It could be to start giving in a way that stretches you. Maybe it's to fast or possibly it's to wake up early and begin a new habit of Bible study with him. Oh, I may not name it here, but you know what God has called you to obedience in. And you've taken a deep breath and stepped out.

Only your situation hasn't changed. The healing hasn't come. The Bible study hasn't grown. The breakthrough for you child hasn't occurred. The bill wasn't paid. And you're left in that white space wondering, how long God? If I'm being obedient in my work, why hasn't my situation changed? And he comes and whispers

Be strong, and work...for I am with you.

He doesn't change the situation, but he does encourage. Because ultimately, he's after out hearts. He's after our sold-out, passionate trust in him, not his works. That doesn't mean he won't bring blessing, because our God loves blessing his children. It brings him joy. But those blessings are never more important to him than the work he is doing in our lives.

So let's go back and look at that second white space. Like I mentioned, their story doesn't pick back up again until when? The twenty-fourth day of the ninth month--exactly three months from the day they stepped into obedience. And what's so cool about that isn't simply that it's the exact day, but what God goes on to say through Haggai. He once again asks them to give careful thought (check out the first post in this series here), only this time it's too look at what God's going to do. Listen:

All right, there's just so much cool about this part of the story. First, God's perfect timing. I loved that it was exactly three months to the day. No, that doesn't mean we mark it out on our calendars to be the same--some of us have already waited far longer--but it does mean we can rest assured that his timing is always perfect. Always.

Second, it's that he brings them full circle. The story began with Israel being called to give careful thought to their ways. They weren't walking the path God called them to. Their priorities were messed up, and God used that phrase to point it out. But now he's rewriting their story as only he can. Now he's using the same phrase to point out the change in them and his love for them. And now when he says "give careful thought" it's to mark down this day as a spiritual victory. I encourage you to do this. When God finally breaks through in the area you've been patiently and obediently walking in, mark it down. A notebook. Your Bible. Wherever it needs to be so you never forget it.

Finally, it's the end of their white space. We read the story, and we barely have to skip that white space, but they had to live it. And if you're there right now, you know those white spaces can last far longer than you ever imagined. You wonder if God's still writing your story on the other side. If you even heard him correctly. If you even have the strength to keep going.

Be strong and work, for I am with you.

He's right there in the white space with you. He's working something you can't even imagine. As my mom always says, just keep on keeping on, because at exactly the right time, God will move. And on that day, give careful thought, because you'll have come through the white space to the other side, and it will be time to celebrate and remember.

If you've recently come through a white space, leave a note here so I can celebrate with you! And if you're in that white space today, how can I pray for you? Leave a comment or email me. I'm all about the power of prayer. Happy Monday, friends!
Posted by Susan at 7:00 AM