Paula Mowery has visited my bookshelf before. In the past she's written women's fiction, and her stories centered around blessing others. They were encouraging reads that made you think. Recently she tried her hand at her first solo romance, and that encouraging voice she writes with came through loud and clear. Something unique about her first romance Legacy and Love is that she's split the book into two stories. So let me give you a run-down, and we'll chat on the other side. 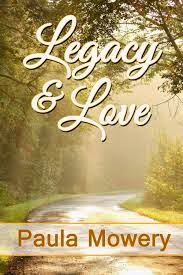 The Prayer Shawl
Sean Holland is a magazine reporter always looking for the next story. Hope Weaver is a pediatric nurse who shares Christ through making prayer shawls. The shawls are just the touchy-feely story Sean needs, even though he’ll have to endure Hope’s strong Christian beliefs to get it. An unexpected connection brings them together as a couple. But, can they find love if they don’t share their faith?

Inheritance
Alex Lyndon’s life has been a series of fits and starts with no finishes. She finds herself jobless and divorced. Now her only family, Granny Olivia, is critically ill. Chase Carson had to step into running the family business when his father died. The time is past due for him to visit Miss Olivia. Alex and Chase must go on a treasure hunt. Will each find purpose and love for their lives in the process?

I'll start with "The Prayer Shawl" as it was the first in the book. It took me a little bit to get into the story--and by little bit, I mean a couple of chapters--but I soon found myself immersed and flipping pages. I enjoyed the twists to this story and the developing relationship between Hope and Sean, along with Sean's continued movement back toward God. I struggled with a story element toward the latter half that pushed Hope and Sean together at a faster rate than I'd have liked, even though I understood the reason behind their decision. Still, other than that momentary blip, I truly enjoyed the two main characters, and their happily-ever-after left me smiling.

Now onto the "Inheritance". This story started out in the first person from Alex Lydon's point of view. Then it switched to third person for Chase's point of view. As a reader, I struggled with the swaps. What I didn't struggle with, however, was the budding relationship between Alex and Chase. I also enjoyed the hint of suspense in this story, because yes, I'm a sucker for mystery or suspense woven into romances. Overall, while I'd have preferred to have the entire story in either first or third person, I enjoyed it very much and again, was smiling at the end.

After closing the entire book, I found myself happy that Paula took the plunge into writing romance too, and hope she continues mixing them into her women's fiction. You can purchase Legacy and Love here and if you'd like to know more about Paula Mowery, here's a small tidbit and you can also visit her at paulamowery.blogspot.com

Paula Mowery is a published author, acquisitions editor, and speaker. Her first two published works were The Blessing Seer and Be The Blessing from Pelican Book Group. Both are women’s fiction, and their themes have been the topics of speaking engagements. In November of 2013, her first romance released in the anthology, Brave New Century, from Prism Book Group. Legacy and Love is her first solo romance.