It's a big day here with lots of giveaways, but first...I am beyond excited to feature this book. It is not only a debut, but it's also the first in the Everstone Chronicles. I have had the privilege or reading this book since it's infancy stage and through all the rounds of edits. Today it releases for everyone to read! Here's a blurb and we'll chat on the other side:) 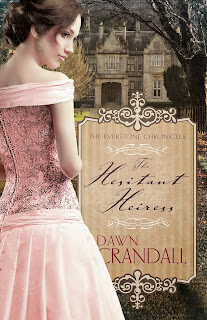 After being unjustly expelled from the Boston Conservatory of Music, Amaryllis Brigham sees her dreams of founding a music academy in her hometown of Seattle, Washington, disappearing before her very eyes. Now, the only way to achieve her goal comes with high stakes for someone set on avoiding men as much as possible: Marry within the year to inherit the immense fortune of her estranged grandmother. Amaryllis reluctantly moves in to her aunt's Boston home and rubs shoulders with fashionable society. Despite her own misgivings, she soon finds herself quickly falling in love with the most unlikely of men, Nathan Everstone, the envy of every eligible female, whose father has haunted her dreams for the decade following her mother's tragic death. However, Nathan turns out to be much more than he seems...and everything she never knew she wanted. But can she ever really trust an Everstone man?

Let me start by saying this book is not only historical, but it's written in first person. The combination of the two I typically shy away from, however Dawn's writing immediately drew me in. She writes with an old voice (Jane Austen fans, you will love her!) that spins you into her heroine's world and keeps you there deeply ensconced in her surroundings and emotions. Amaryllis and Nathan, along with the beautiful setting of Boston, come alive with each page you flip. Their connection is tangible and with the added touch of intrigue--who is really behind the problems that seem to plague Amaryllis?--you'll be up late into the night to finish this book.

I am blessed to consider Dawn my critique partner and so very happy to see her book finally in the hands of readers everywhere. From the moment I read page one of this story (before it was even contracted) I knew it would find its way onto shelves all over. Not only does Dawn give you a beautiful romance, her characters also mature spiritually in a natural story arc that slips its way into your heart.

So if you're interested, leave me a comment AND your email address below! And keep scrolling down this post to find out about my monthly Bookshelf giveaway too:) 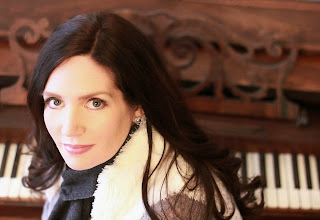 A graduate of Taylor University, Dawn Crandall holds a degree in Christian Education, and is a former bookseller at Barnes & Noble. She didn’t begin writing until 2010 when her husband found out about her long-buried dream of writing a book. Without a doubt about someday becoming published, he let her quit her job in 2010 in order to focus on writing The Hesitant Heiress. It didn’t take long to realize that writing books was what she was made to do. Dawn is represented by Joyce Hart of Hartline Literary.
If you'd like to learn more about Dawn, the Everstone Chronicles, or keep track of her blog tour and winners, you can visit her website: dawncrandall.blogspot.com

MONTHLY BOOKSHELF GIVEAWAY:
For those of you who've been around a while, you know the routine! It's time for my monthly bookshelf giveaway to say thanks to all you who've 'liked' or 'followed' one of my pages. (If you never have, would you mind doing so? It's a huge help to us aspiring authors! You can find the links at the top of my side bar.) So...if you're interested in one of my books from July, leave that in your comment too! I'll be collecting all the names and announce my monthly bookshelf winner next Friday. That winner will get to pick one of the books I reviewed in July, and I'll send it to you as a big thank-you simply for following me on social media:) The books and reviews eligible are below: 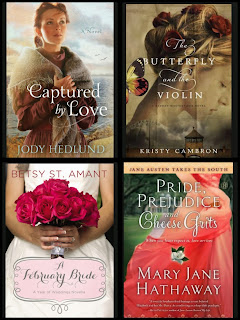 Reviews:
Captured by Love
The Butterfly and the Violin
A February Bride
Pride, Prejudice, and Cheese Grits
Posted by Susan at 7:00 AM