First off, the winner of my September Bookshelf giveaway is:

Carol, email or Facebook me your choice from last month's Bookshelf Reviews, and I'll get it to you:)

Now onto building October's bookshelf...
I actually found Unraveled on Twitter when I connected with the author, Heidi McCahan. So for all you authors out there, Twitter does work:) Here's a blurb on the book, and we'll chat on the other side! 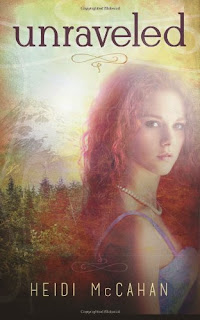 Blind-sided by her questionable fiance, Lauren Carter returns to the one place she's been avoiding, the place she used to call home. As she's forced to look into the eyes of her past and even worse, her unraveling future she discovers that running only leaves you out of breath on a dead end street. Will she choose to unveil the secrets that haunt her? Or will she bury them once and for all and embrace a new life so different from the one she once held dear?Blake Tully, wildly successful and breathtakingly winsome owner of a new rafting business, finds Lauren's unexpected reappearance confusing. As he torments himself with what if's and what should've been's, he can't mistake the feeling that crawls down his spine every time he looks at her. Although she broke his heart once, he longs to give his childhood sweetheart another chance, but can he convince her to stop running away when life gets tough? And can he forgive her when he discovers the reason she's been hiding?Follow the story of these two shattered hearts as they discover the beauty of grace and forgiveness.

There was so much to enjoy about this book. The rugged and beautiful state of Alaska as the setting, an old love reawakened, a small hint of mystery in our main character's past and the curiosity of what her future held. All those elements played together wonderfully in a mixture that pulled you forward through the book.

Blake and Lauren still very much have feelings for one another, but are the feelings simply nostalgia for the past or are they still in love today? And can they overcome the hurts from when Lauren left to build a future?

I enjoyed getting to know these characters along with the town they lived in. There was just enough going on with secondary characters that the story felt fully fleshed out and three dimensional. There were a few editing issues, but not enough to bug me too much. Also, at times during the second half of the story things were not as smooth as the first. The story elements were all there, but at moments they felt rushed or not as seamlessly connected as the author stitched together in the beginning. That being said, I still thoroughly enjoyed this story and would definitely read another of Heidi's books. Neither points were enough to stop me from picking up her work again. Her characters were intriguing, the setting was gorgeous, and the story was full of forgiveness and love.

I happily give Unraveled 4 out of 5 stars, and you can purchase it here. 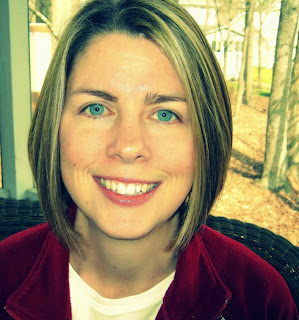 Here’s the scoop from Heidi: I am a Northwest girl recently transplanted in the South, where I’m cultivating a writing career in the midst of mothering our three fabulous boys. When I’m not stepping on Legos, chauffeuring the fellas around suburbia or folding laundry, I like nothing more than to curl up with a great cup of coffee and a compelling read.

You can meet her at her site: heidimccahan.com
Posted by Susan at 7:35 AM