Bookshelf Friday - The Secret of Pembrooke Park by Julie Klassen

Julie Klassen is one of the first historical writers I read that made me think, hmmm...historical isn't that bad. Her books gave me the push to jump in and read more historical. I haven't had a chance to pick up a book by her for some time, so when The Secret of Pembrooke Park wound up in my hands, it was like spending time with an old friend. Here's the blurb and we'll chat on the other side: 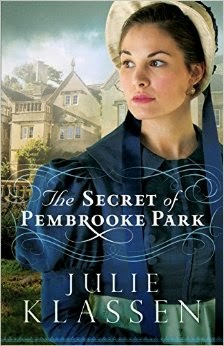 Abigail Foster is the practical daughter. She fears she will end up a spinster, especially as she has little dowry, and the one man she thought might marry her seems to have fallen for her younger, prettier sister. Facing financial ruin, Abigail and her father search for more affordable lodgings, until a strange solicitor arrives with an astounding offer: the use of a distant manor house abandoned for eighteen years. The Fosters journey to imposing Pembrooke Park and are startled to find it entombed as it was abruptly left: tea cups encrusted with dry tea, moth-eaten clothes in wardrobes, a doll's house left mid-play...The handsome local curate welcomes them, but though he and his family seem acquainted with the manor's past, the only information they offer is a stern warning: Beware trespassers drawn by rumors that Pembrooke Park contains a secret room filled with treasure.This catches Abigail's attention. Hoping to restore her family's finances--and her dowry--Abigail looks for this supposed treasure. But eerie sounds at night and footprints in the dust reveal she isn't the only one secretly searching the house.Then Abigail begins receiving anonymous letters, containing clues about the hidden room and startling discoveries about the past. As old friends and new foes come calling at Pembrooke Park, secrets come to light. Will Abigail find the treasure and love she seeks...or very real danger?

I loved this book! The mystery kept me guessing with a cast of characters who pulled me in and made me ask so many questions. I truly enjoyed how Julie unrolled the mystery of Pembrooke Park and all involved. I held many ideas but never was 100% sure if I was correct in my guesses until the very end. And the many answers to those many questions were revealed in stages, which kept me turning the pages anxiously awaiting more.

I also loved Abigail and her insecurities--ones so many women can identify with. She was an authentic character whose development grew in perfect pacing with the rest of the story. The romance aspect and who she'd end up with was also believable and sweet, allowing for questions of a whole other manner.

All together, this book kept me drawn in from page one with so many layers and elements that it will be sure to sit on my shelves for years. I happily give The Secret of Pembrooke Park 5 out of 5 stars.