I've been looking for a pirate book for some time, mainly because I haven't read one. Typically they look a tad too...spicy...for me. So when I saw one with MaryLu Tyndall's name attached I knew it would be a safe read and something new I could try. Here's the blurb, and we can chat on the other side:) 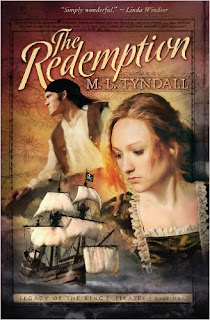 Charlisse Bristol sets off on a voyage in search of a father she never knew, only to become shipwrecked on an island. She longs for a father’s love to fill the emptiness in her soul from an abusive childhood, but resigns herself to a lonely death of starvation. Her salvation comes in the form of a band of pirates and their fierce, enigmatic leader, Captain Merrick. The last thing Merrick expected to find in the middle of the Caribbean was a beautiful maiden. Now he is burdened with the task of not only protecting her from his crew, but from himself. A recent convert to Christianity, Merrick is haunted by a sordid past while he struggles to become a better man and accepts a mission from God to hunt down the most vicious pirates on the Caribbean. Charlisse can make no sense of Captain Merrick. A pirate who prays and drinks rum? Breaking her vow to never trust any man, she finds herself falling for the pirate/priest, who more than once risks his life to save her. When she confides in him her quest to find her father, Merrick agrees to help. What he doesn’t realize is Charlisse’s father is the ruthless Edward the Terror, the one man Merrick has vowed to hunt down and kill. Evil forces are at work against Charlisse and Merrick: enemies, battles, imprisonment, jealousy, and betrayal, all threaten to destroy not only their new found romance but their very lives. It will take a miracle—or several—for either of them to survive.

I'll start off by saying that the cover I've featured here is an old one. The book has been reformatted and the new cover was one that had me reminding myself to "not judge a book by its cover"...and I'm glad I didn't.

Tyndall begins this story at a fast pace which immediately drew me in. I connected with Charlisse from the beginning, and the same can be said of Merrick. Tyndall develops an undeniable chemistry between these two likable characters, both of whom are well fleshed out and believable. Merrick is  a strong male lead--which he should be as a pirate!--who is struggling to place his new faith into his old world. Charlisse, however, has no faith, and as Tyndall reveals layers of her backstory the reader not only understands why but sympathizes with her.

This was one aspect of the story that only made it stronger. Charlisse's history was a large portion of this story and brought out in an even pace, honestly shared in natural moments. Merrick is well-matched for Charlisse and able to help her understand who God truly is and thus establish God's truths in place of all the lies she's grown to believe. This faith element is strong and natural to the story.

My only complaint is at times some of the conflicts these characters face became repetitive. A few scenes could have been cut without losing the meat of the plot. That being said, this was still a very enjoyable read. The Redemption is the first in a series, and I've no doubt I'll dive into the second. If you're looking for adventure on the high seas with a band of pirates and romance tossed in, this is the book for you.

I happily give The Redemption 4 out of 5 stars and you can purchase it here.
Posted by Susan at 7:00 AM