I purchased this book having been a fan of Irene Hannon's for some time even though I've missed a few of her more recent releases. So I thought it was time to pick one up. Here's the blurb, and we'll chat on the other side. 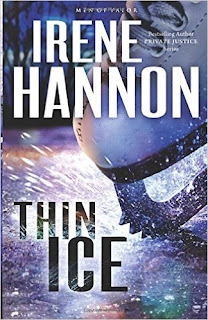 After losing her parents in a car accident and her sister to a house fire, Christy Reed has been mired in grief. Life is finally starting to feel normal again when an envelope arrives in the mail--addressed in her sister's handwriting. And the note inside claims she is still alive.FBI Special Agent Lance McGregor, a former Delta Force operator, is assigned to reopen the case, but he's coming up with more questions than answers. If Ginny Reed is still alive--who is the woman buried in her grave? Where is Ginny? And is Christy a pawn in a twisted cat-and-mouse game--or the target of a sinister plot? As he digs deeper, one thing becomes clear: whoever is behind the bizarre ruse has a deadly agenda.Bestselling author and two-time Christy Award finalist Irene Hannon warms readers' hearts as they root for a romance between Lance and Christy, but she pulls out all the stops as this high-stakes thriller chills to the bone in a race to the finish.

If you've read Hannon's romantic suspense books before, you'll note they take a similar pattern--which I believe is more due to the genre guidelines and expectations than the author's writing ability. So for those of you who have loved her books in the past, this one will be no exception.

Hannon creates fresh characters in each of her books, typically with her male lead in law enforcement of some kind. Lance is no exception. Still, he carries his own voice and backstory, and I found I liked him very much. I also enjoyed that Christy is a figure skater, which was a new background Hannon has yet to explore with her characters. You could tell she'd researched this sport, and it added a depth to Christy's story that only made her more enjoyable to read.

The suspense aspect of the story unfolded at a nice pace, as did the romance angle. While I can't say there were too many surprises, the plot kept me turning pages, and I was always happy to pick the story back up whenever I'd been forced to set it down for any period of time. Hannon is a trusted author whose books always deliver and one I will happily read again.