Bookshelf Friday - Told You So by Kristen Heitzmann

Before I start, I need to let you know who won a copy of Jill Kemerer's latest release:

Inbox me your address, and Jill will send you a copy!

Now onto today's bookshelf. I hadn't read a book by Kristen Heitzmann in some time, so when I saw her newest release I decided it was time to revisit her. Here's a short blurb, and we'll chat on the other side. 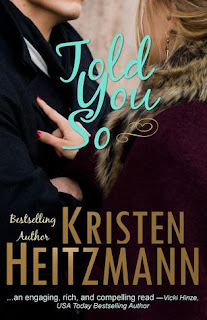 From the minute Grace Evangeline throws her sweet tea in Devin Bressard’s face, their battle of wits and cross-purposes overtakes their lives. Sassy “angelic” Grace Evangeline will stop at nothing to see her romance novel produced for Broadway. Devin Bressard knows all about the commercial success of Ms. Evangeline’s “novels”—as far from his literary, nerve-striking plays as anything could be.
Grace intends to pull his head out of the rarified air long enough to make her point, even if it involves stalking him and infiltrating his friends and colleagues. Devin knows she’s trouble, but who would guess the spokesperson for strength and virtue would be a calamity vortex? He mounts a fierce resistance, but when he’s forced to work with Grace, his profession and sanity aren’t the only things at risk. Collapsing walls on both sides bring a détente that could shatter their bond—or resound through more lives than their own.

The cover, blurb, and author name all pulled me in. The first line snagged and kept me. Even the first several chapters. I loved the snappy dialogue and unique characters along with the conflict between the two leads. It was honest and moved the plot at an easy pace. Grace and Devin often described themselves as combustible, and they were spot on. They couldn't seem to be in a room together without a very natural tension surrounding them. At first I didn't want to put this book down--which is not unusual for a Heitzmann novel.

Somewhere in the middle, however, that began to change. The center chapters uncharacteristically slowed and the plot began to slide into different directions. While the story was layered, those layers did not always connect or flow with me as a reader. Also, while I'm all right with characters making choices I disagree with (it's how they grow), I felt more could come out of choices both Grace and Devin made. For me, the spiritual thread wasn't as fleshed out as I typically like to see.

All that said, I enjoy Heitzmann's writings and would definitely read her again. She does craft characters who are real and flawed, nails dialogue, and sets scenes with great tension. I give Told You So 3 out of 5 stars, and you can purchase it here.

If you'd like to see my rating system, you can check it out in the right sidebar.
Posted by Susan at 11:45 AM