So I was reading Jeremiah the other day and chapter 32 stopped me. Mainly because of it’s title: Jeremiah Buys a Field.

But that’s what’s so cool about Jeremiah. He did crazy because God asked Him to. Make no mistake. He didn’t fully understand it at first either, but He did it.  In fact, listen to his response: 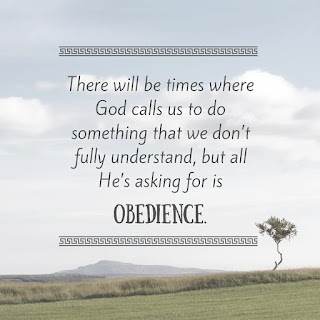 Here's the thing, there will be times where God calls us to do something that we don’t fully understand, but all He’s asking for is obedience. That takes a huge amount of faith. It also means we better know His voice. Jeremiah shelved his questions until after he responded because he knew God’s voice.

And that’s what I want—to know His voice so intimately that I don’t even have to ask. I can jump, no matter how crazy it sounds to me. I’m not always going to have the full picture, but I’m not supposed to because that’s His job. All I need to do is be willing.

Ultimately, God does answer Jonah’s question. It’s all one big object lesson. He’s punishing Israel by handing them over to Babylon, but that punishment won’t last forever. Yes, He was angry, yes they were being punished, but then He was going to hug them. He would “bring them back to this place and let them live in safety.” (vs.37) They’d return and “fields [would] be bought” again. (vs. 44)

And He demonstrates this promise through Jeremiah purchasing the field.

Good thing Jeremiah listened first. It allowed God to bring hope in the middle of what appeared a hopeless situation.

Are we willing to do the same? Even if we don't understand the "why" in the moment, will we still listen AND follow? Praying we all have Jeremiah's boldness!
Posted by Susan at 7:00 AM