Headland's fourth installment to her "Beacons of Hope" series released recently, and I had to snap it up. Here's a short blurb, and then we'll chat on the other side! 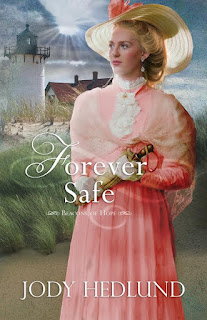 Race Point, Massachusetts, 1876 Will she ever be able to stop running, even when she believes she’s finally safe? Heiress to a vast fortune, Victoria Cole has everything she wants, including the perfect fiancé. Having left two other men at the altar, Victoria is sure that now she’s found her true love and will finally live happily ever after. As her wedding draws near, however, Victoria’s life is threatened. To keep her safe, Victoria’s father hires a bodyguard. Tom Cushman’s number one priority is protecting his clients, which means no personal entanglements. But he’s never guarded someone as beautiful and winsome as Victoria. After a near-kidnapping, the wedding is cancelled, and Tom hides Victoria at Cape Cod’s Race Point Lighthouse until her attacker can be found. Appointed as assistant light keeper with Victoria posing as his wife, Tom believes the isolation of the lighthouse will keep her safe. As Victoria struggles to live without familiar luxuries, her heart betrays her with growing feelings for her protector. Determined to help Tom stop fleeing from his haunted past, can the runaway bride learn to face her own fears? With the attacker closing in, will both of them ever be able to stop running and find the safety they long for?

While Hedlund is currently working on a new series, she had Victoria and Tom's story still running through her head, asking to be told. So she decided to self-publish this book, and I'm so glad she did! As is custom with Hedlund's books, the romance is more than about attraction--though she writes chemistry extremely well! Victoria and Tom seem opposites but they pull out the best in one another. The conflict that is created while recognizing this, however, provides for some entertaining moments. I truly liked Victoria better the more Tom challenged her. She's never a whiny character, but one that tackles each obstacle in her way. She has a backbone and stands up to Tom when needed. Add in the dynamics of his parents and how they challenge his growth and you have pages full of a very enjoyable story.

A fresh aspect to this book is Hedlund takes us from the shores of Michigan to Massachusetts. And though I struggled with the need for them to actually marry to pose as man and wife, that was a minor issue with the book that in no way detracted from my overall enjoyment. As for the suspense aspect, I loved the addition of this, though the romance certainly took center stage. Another well written book from Hedlund who never fails to deliver a satisfying read. She remains on my must-read list.

You can purchase Forever Safe here.