Don't you love it when you pick up a book without huge expectations and then completely fall in love with it? Me too! :) That recently happened when I read Kristi Hunter's debut, A Noble Masquerade. Here's a blurb, and we'll chat on the other side! 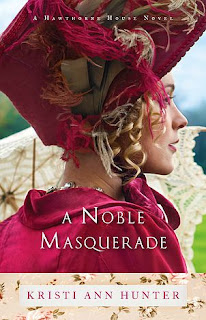 Lady Miranda Hawthorne acts every inch the lady, but inside she longs to be bold and carefree. Entering her fourth Season and approaching spinsterhood in the eyes of society, she pours her innermost feelings out not in a diary but in letters to her brother's old school friend, a duke--with no intention of ever sending these private thoughts to a man she's heard stories about but never met. Meanwhile, she also finds herself intrigued by Marlow, her brother's new valet, and although she may wish to break free of the strictures that bind her, falling in love with a servant is more of a rebellion than she planned. When Marlow accidentally discovers and mails one of the letters to her unwitting confidant, Miranda is beyond mortified. And even more shocked when the duke returns her note with one of his own that initiates a courtship-by-mail. Insecurity about her lack of suitors shifts into confusion at her growing feelings for two men--one she's never met but whose words deeply resonate with her heart, and one she has come to depend on but whose behavior is more and more suspicious. When it becomes apparent state secrets are at risk and Marlow is right in the thick of the conflict, one thing is certain: Miranda's heart is far from all that's at risk for the Hawthornes and those they love.

I had the chance to read this book on my recent vacation. I figured it would fill in the few quiet moments I had, but quickly became so sucked into the story that I didn't want to put it down. Hunter does an amazing job crafting two leads who you root for individually and as a couple. Their immediate chemistry is eclipsed by how well their personalities compliment each other. They challenge one another and yet see the best in each other. And they are downright funny together at times. I found myself smiling my way through the book. Add in the light mix of suspense & mystery--which is never drawn out needlessly--and both hero and heroine only shine brighter. These are two characters who stayed with me even after I turned the final page.

And though the plot is slightly predictable, that in no way dimmed my enjoyment of this book. Hunter's writing voice, the plot itself, and the characters she created all flowed together seamlessly.  I happily give The Nobel Masquerade 5 out of 5 stars and you can purchase it here.