We conquered Algebra II in Tuttle homeschool last year. Honestly, I think there should be a stronger word than conquered available for that sentence. Each day added something new to the previous lesson until at one point there were so many steps to answer just one equation that our eyes crossed before moving to the next problem. It was tough. Doable. But tough.

About two-thirds of the way through the book I noticed my son, who'd been doing well, began to stumble through his lessons. Suddenly I was marking more wrong than right, so I decided to sit and do his lesson with him. I watched as he struggled over a question, adding steps he didn't need, to arrive at an answer he shouldn't have landed on. The question didn't require all the maneuvering he was adding into it. It was straightforward and used concepts we'd learned the previous year. I began to look back on his work only to notice a pattern in the incorrect questions. When I brought it to his attention he shook his head and said, "I guess sometimes I make this harder than it needs to be. I just don't think the answer is supposed to be that simple."

Wow. Don't we do that with our faith, friends? Especially for those of us who've been in the faith so many years? We read our Bible daily, we've memorized Scripture, we've walked through tough times, and somewhere along the way we've picked up more steps than needed for answering our problems. Sure, there are times where God's refining work on our issues or old habits needs multiple steps to eradicate them. Yet God's word is so much more simple than we often make it out to be.

Jesus Christ died on the cross to save us from our sin. He rose again, defeating death. He wins.

And that power, that very same power that raises things from the dead, lives in us. 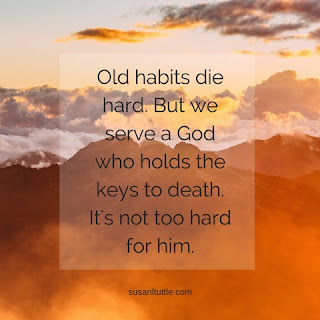 We need to stop jumping through whatever hoops we think it'll take to change and start believing in the power of Christ in our lives. Yes, old habits die hard, but we serve a God who holds the keys to death. Its not too hard for him.

Let's stop believing it is.
Posted by Susan at 7:49 AM