I love how the Bible gives us glimpses of imperfect lives. I love that we see trials and mess-ups mixed in among people who had some of the most miraculous or victorious moments. No, the Bible doesn't hide the doubters, worriers, and strugglers. Which is good, because their stories are where hope is born.

Recently I opened Luke and jumped into Zechariah and Elizabeth's story. These two don't take up much space in the pages of our Bibles, but they do take up a huge spot in fulfilling the prophecy of Christ's birth. See, it was foretold at the very end of Malachi of one who'd come like Elijah and prepare the way of the Lord. People had been praying for the very arrival of this one for 400 years. 400. And I get bothered when I have to pray a week and don't see movement in an area.

Zechariah and Elizabeth had another prayer in addition, only this was a personal one. They wanted a child. Now it doesn't say how long they'd been praying for a baby, but it does say they were both "well along in years" (Luke 1:7) which is a sweet way of calling them old. Knowing how important children were in the time and culture they lived, you can safely believe they'd repeated this prayer for several years. What I love the most? Even as they continued to pray about something they saw no response to, they remained faithful to God. How do we know? Because right before the passage calls them old, it says something far more important: "both were upright in the sight of God, observing all the Lord's commandments and relations blamelessly." (Luke 1:6) They didn't get what they wanted from God, yet they still continued to follow him. Did they struggle? Probably. Have hard days? No doubt. And still they were pillars of faith even in their trial. Wow. I think I want to be like them.

What is even more amazing, however, is that when God finally answers them--and with a literal angel delivering the answer face-to-face--Zechariah questions it. (See. Those not-so-perfect moments remain on the page.) Honestly, I don't think it was because he doubted. I think the reason for his questions were two-fold. First, I think after praying for something for so many years it was hard to reconcile the answer had finally arrived. I think this moment shows how tattered his faith had become. He had the faith to still utter the prayer, but his ability to believe the answer truly would come might have been a bit shredded by time. Sometimes our situations can change so quickly that we need a moment to catch up, and I think that's what happened here with Zechariah.

Second--and this is the part I absolutely love--Zechariah and Elizabeth had been praying for years for two children. One of their very own, and one to usher in the coming of Christ's birth. Never in their wildest dreams did they imagine the two prayers were actually one and the same. So when Gabriel stands before Zechariah and speaks the very words written at the end of Malachi about the child Elizabeth will bear, well, I can see why Zechariah might have been a little stunned. 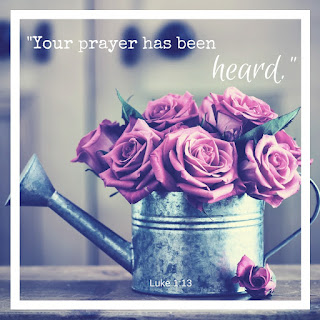 Oh friends, we pray for so many things near and dear to our hearts, but how often are those desires so much smaller than what Christ wants to actually do through us? Zechariah and Elizabeth's picture of a family was huge to them, but what God wanted to do was infinitely grander. If only we could see what he has in store for us! Don't limit your prayers.

And don't be surprised when God delivers the answer--sometimes in a very big way.
Posted by Susan at 7:00 AM