I've been hanging out in Acts this week and came to verse twenty-six where Paul is representing himself in court. See, the Jews were angry with him because he was preaching the Gospel, and they didn't like it very much. They didn't believe Jesus was the Son of God, crucified, and raised on the third day from the dead. And they didn't want Paul preaching any differently. 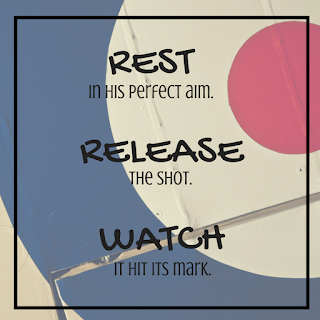 So what about you? Are you waiting for a promise, watching one being fulfilled, or being called back to one you may have overshot? Today let Him guide your hand, rest in His perfect aim, release the shot, and let your arrow hit its mark.
Posted by Susan at 7:00 AM