This past week I was reading Genesis. Sometimes I just like to go back to the beginning. Anyway, I came to the whole Joseph's brothers selling him into slavery part and dove into the familiar story. But it was once I arrived at the end that I stumbled on a few little words that I didn't remember seeing before. I love how God always makes his word new to us:)

So as you'll recall, Joseph's brothers were jealous of him. It didn't help that his daddy, Jacob, showered him with special attention and gifts. To say Jacob lavished him with more love than his other siblings would not be an understatement. Joseph was Jacob's favorite (his little brother Benjamin was a close second) and it was a well known fact. This led to fighting and eventually Joseph's brothers selling him off to rid themselves of him.

If you're familiar with Scripture, you know it worked out all right for Joseph--and his family--in the end. What they'd intended for evil, God wound up using for good. Joseph wound up as second-in-command in Egypt and helping the country through several years of famine. Even his brothers came to him for help, although they didn't realize it was Joseph at first.

Through God's grace, Joseph forgives his brothers. And then he bestows gifts upon them. He gives them animals, clothing, and money while asking them to journey home and bring their father back to him. But while he's bestowing them all with gifts, he gives a heftier portion to his little brother Benjamin. Hmmm...the brothers have been here once before. And here is where the words came in that I've missed so many times before.

You see, as Joseph is sending off his brothers to go retrieve their father, he calls after them, "Don't quarrel on the way!"

Why were these his parting words?

Because Joseph knows how hard it is to change behavior! He knew this situation mimicked the exact one that had gotten them into trouble years prior. And he knew their natural bend would push them toward old actions. Actions they'd been forgiven of and found freedom from. So he was warning them. Reminding them to react differently this time because they were different. 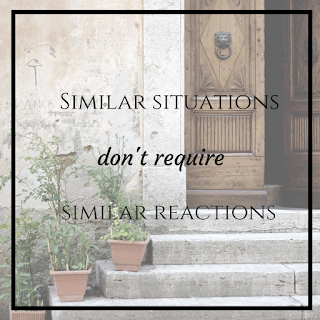 Oh, that we can learn from those few words. Friends, once we know freedom from our pasts, don't go back! Yes. We may be faced with similar situations, but that doesn't mean we have to react in old patterns. God has changed us. So live in that change. Let your old habits die--even if it's hard.
Posted by Susan at 7:00 AM