Bookshelf Friday - All This Time by Melissa Tagg

Boy oh boy! Today I'm reviewing the fourth book in Melissa Tagg's Walker Family series. All This Time has been much anticipated and it released yesterday! I was super blessed to receive an advanced copy of this book, so here's a short blurb and we'll chat on the other side:) 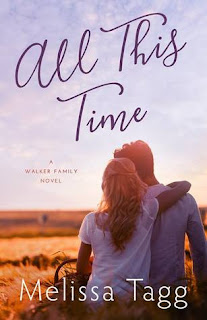 Bear McKinley’s past refuses to let go. Ten years ago, Bear gave up everything—his freedom and his reputation—for his mess of a family. But after years of distance and too many attempts at starting over, he finally has a new life doing noble work in Brazil . . . until his past catches up to him once again. Suddenly he finds himself back in Maple Valley, charged with the care of his missing brother’s children, convinced he’s out of second chances to make his life count. And yet, with every day that passes, these kids, this quirky town and the woman he never stopped missing help patch the holes in his heart. Maybe this is the fresh start he’s been longing for all along. But as his newfound hope grows, so does the mystery surrounding his brother’s activities—and when the threat reaches into the lives of those he loves, it’s clear he can’t run away this time.Fear holds Raegan’s future captive. Raegan Walker is fine. She’s happy working a slew of part-time jobs, still living in her childhood bedroom and rarely venturing from her hometown. At least, that’s what she tells everyone . . . and herself. But she can’t help wondering what might’ve happened if she hadn’t abandoned her art so many years ago—and if Bear McKinley had never left. When Bear returns and she’s commissioned for a painting that just might revive her artistic ambition all in one week, it’s time to finally reach for more than fine. But doing so means facing the fears that have held her back all this time, including admitting the secret she’s kept from Bear and her family. With her dream and her heart on the line, how much will Raegan have to risk to finally chase her happy ending?

I want to start by reassuring you that this novel can function as a stand alone. However...you are going to want to read the entire series if you haven't already. Melissa Tagg only continues to grow better and better as a writer.

I loved the stories of both these characters. Them navigating all of their past junk that they've tried to ignore only makes the story richer. While Bear is seeking to outrun his past, Raegan is outrunning her fear, but what is so great is how they help one another face and overcome their struggles. It makes the reader root for them all the more. And for those readers who've read the entire series, the payoff of finally seeing Bear and Raegan come together is even greater:)

And these two are meant to be a pair. They compliment each other so very well. Their story is fresh and the plot is perfectly paced without being forced. There's a depth to the characters Tagg pens that makes them feel like friends you could sit down with over coffee--and Bear likes his coffee:) The love story is sweet and lined with the slightest of mystery/suspense following Bear's storyline. All the layers create a read that you don't want to put down and bring not only a sweet ending to Bear and Raegan's story but also to the entire Walker Family series.

I happily recommend All This Time and you can purchase it here. (Ooooh, and it's currently on sale. $3.99 for the Kindle version!) Also, Melissa has a giveaway going on here, so you'll definitely want to check that out! Happy reading, friends:)

***I received a complimentary copy of this book from the author. All opinions expressed are my own. I was not paid or obligated to write a positive review.***
Posted by Susan at 7:00 AM