Even in the Silence

Friends, I know I've been quiet around here for some time. Sporadically posting and then disappearing again for a bit. I'll admit to being in a very busy season of life, and that's affected some of my ability to post. In fact, I'm hoping this summer to rearrange things around here and discover new ways to connect! But if I'm being honest, much of the reason I hadn't been posting is because I was going through an extended dry season. And not simply dry, but silent. God didn't only stop speaking, he stopped visibly showing up...and my life felt incredibly barren.

At first I did everything I knew how to do. I opened my Bible...but nothing connected. I prayed...and only heard silence. I worshipped...but the songs fell flat. I called out his Word...but it felt powerless. What had I done for God to desert me?

The answer? Nothing. Because while he was silent, he wasn't gone. God doesn't leave us. Period.

Just like I entered the season in one breath, on another breath eighteen months later, it lifted. God didn't flood me with his presence, instead it began to trickle in. Can I tell you how refreshing even a drop of water is when you've been parched for so long? And as the ground of my soul started to soak him up again, I continually asked why he'd placed me in a silent desert. He didn't answer at first, but as I keep seeking him, one day he responded.

He simply whispered to me: You needed to know I was God even in the silence.

You see, friends, I knew God in so many circumstances. I could call out his names, like I said above.  No matter how hard life became, I knew he was there. He is Jehovah Shalom. He is Jehovah Jireh. He is Jehovah Nissi. He is Jehovah Rapha...I could go on and on about who he is. I've known his presence and power in my life in so many ways. Yet I'd always known him based on a specific attribute. But there is another name he goes by...a name I'd never learned: I AM. 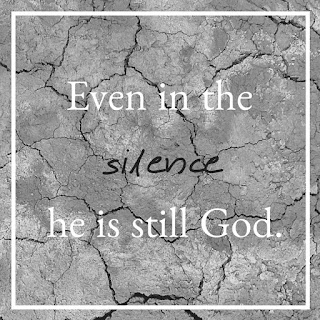 Friends! What we believe cannot rely on a feeling or on the attributes we've attached based on the history we've received. It can only come from the knowledge of who he is.

The Great I Am.

And that never changes no matter what season we find ourselves in....one brimming with his presence or one completely silent.
Posted by Susan at 5:13 PM

Email ThisBlogThis!Share to TwitterShare to FacebookShare to Pinterest
Labels: I am, names of God, silence, susan l. tuttle